One of my investors’ most common questions is how cost segregation can impact passive real estate investors in multifamily syndication.

First, let’s define the term cost segregation. It is the process of identifying personal property assets that are grouped with real property assets and separating out personal assets for tax reporting purposes. I wouldn’t classify this as a tax loophole. It’s a common practice that’s been around for decades. Here’s how it works: the IRS essentially allows you to write off a paper loss from your taxable income. Typically, if you have a rental property, you can write off the entire value of the property over 27.5 years.

You have the income generated from the rental property, and you have your related expenses—your mortgage, interest, management fees, and even costs like replacing a furnace that might come up. When you deduct those expenses from your income, taxable income is left. You’re not done yet, though. You still have the depreciation of that property, which you can count as a loss on your tax return. This again shrinks your taxable income. It’s one of the best tax advantages and where cost segregation comes into play.

Cost segregation allows you to accelerate the depreciation schedule. As I mentioned earlier, you can depreciate the value of an apartment building or your rental unit over 27.5 years without cost segregation. 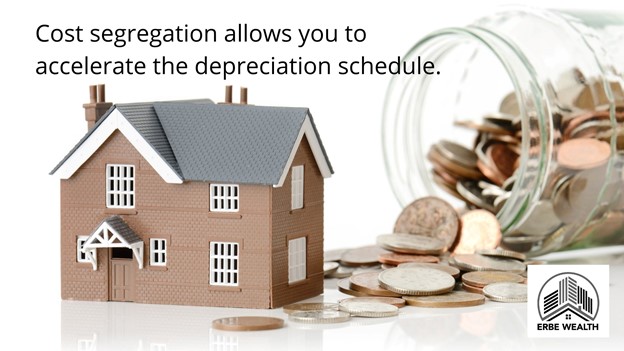 With cost segregation, you can accelerate that timeline and take your depreciation much sooner. How much sooner, though?

Well, let me tell you how it works. You send an engineer to your property, and the engineer has a giant spreadsheet where they break down the entire building into its parts—roof wiring, carpet, appliances, furniture, etc. The IRS allows you to depreciate these different items over various time schedules. For example, the carpet might depreciate over a five-year period. A roof may be 15 years, electrical wiring, perhaps another 15 years, or whatever the case may be. But by using this spreadsheet, applying the tax code to each of these elements, about 90 percent of the value of the building is depreciated in the first seven years or so. That’s pretty cool.

It goes a step further. When he was elected as president, Donald Trump passed a slight tweak to the law, which is now called “bonus depreciation.” This allows you to deduct nearly 100 percent of the value of the building in the first year. It gets better. Previously, bonus depreciation would only apply to new equipment like that furnace you had to replace, but this tweak allows for the bonus depreciation to be applied to used equipment as well. The amazing part is now you can deduct almost the entire cost of the property bill, so you end up with this massive taxable loss in year one.

That’s why for all the properties that we purchase and that I’m involved with, we do a cost segregation analysis and pass that bonus depreciation onto our investors. 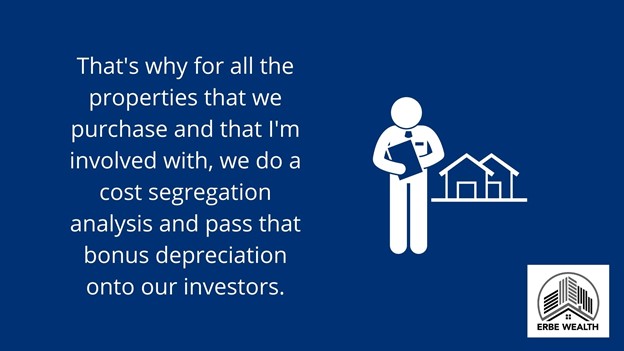 Let me break down a basic example for you. Let’s say you invest $100,000 in one of our multifamily syndications, and suppose we distribute an 8% return on that money. That’s an 8% cash-on-cash return. You’re putting that money in your bank account. You’re going on vacation with it. You’re spending it or doing whatever you want to do with it.

Then come tax time, you get what’s called a K-1, which is your tax statement. The K-1 is what you give to your CPA to do your taxes. It shows that you received an eight thousand distribution, but your taxable loss was roughly $40,000. You’re thinking that your CPA is going to look at this and go, “What the heck happened? You lost money on this; this was a terrible idea.” However, don’t panic. And don’t worry, while you show a taxable loss, you still made money.

This is why many people do not understand the tax benefits of investing in syndications. They think we must be a bad investor because we show a taxable loss. Meanwhile, we are putting money in our pockets. That’s the part the average person does not understand. The multifamily investor gets to put money in their pocket through deferred taxes.

That’s the beauty of this bonus depreciation. You have a taxable loss and can use it to offset other income strategies you may be using, and if you don’t use the depreciation that year, you can roll it forward to the following year.

So, let’s say you have income from your investment the following year, another $8000. You can offset that gain with any kind of passive loss that you haven’t used yet. I work with many full-time investors who pay little to no taxes, and the government has set this up to incentivize real estate investors.

As the saying goes, there are only two things in life you can’t escape: death and taxes. Depreciation, in one sense, avoids taxes because the IRS considers it as an expense. Therefore, it reduces your taxable income right now. In that sense, you’re literally avoiding taxes. However, when you sell, you may have to pay taxes on the gain. That is why you could argue that the depreciation could be a deferred tax. For example, when you pay taxes, you have to pay taxes on the gain you buy a property for one million years later, you turn around and sell it for two million. There’s a one million gain that you pay taxes on. However, because of the depreciation, it lowers your basis.

So, in other words, when the IRS calculates your gain, it’s not the full price. Instead, it’s on the one million with whatever you depreciate subtracted from it. The purchase price minus depreciation equals the basis.

You’re getting the benefit of the depreciation now, but you may have to pay for it later. There are mechanisms to defer that tax as well. For example, there’s something called a 1031 exchange. It essentially allows you to take the gains you’ve made and roll them into an equal or greater piece of real estate.

The way real estate is constructed, if you know the system and have a good tax adviser, you will pay very little in taxes. These are areas where you will want to work with someone who’s an expert in real estate investments because the tax benefits are enormous. The question isn’t if you’re going to save money. The only question is how. It takes real experts to help you answer that question. 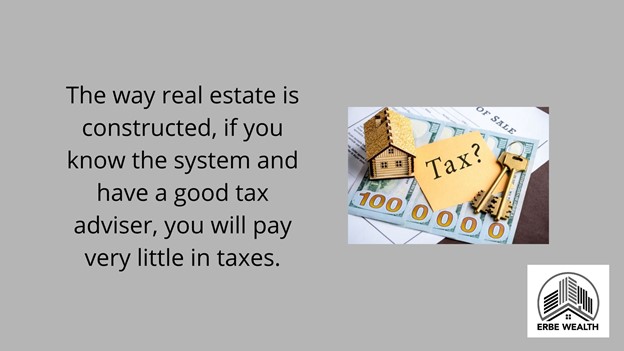 If you’re interested in investing in multifamily properties but not sure of the next step, sign up here to join my community and receive free education, bi-weekly newsletters, and get the first notification of our new investment opportunities before it gets released to the general public.