Do It Yourself vs. Syndicated Investing

The topic for today is DIY (do it yourself) real estate investing vs. syndicated investing.

I’ll go over the main ways they are similar and highlight the important differences.

In addition, I will highlight some of the past insights I gained as a landlord—all to help people figure out which type of investing would better fit them.

So, jumping right into it, the first reason they are similar is the simple fact that they are both real estate.

When a DIY investor buys a rental property on their own, they obtain the loan, and at closing, they get a set of keys to the property, and it is theirs to manage going forward.

When a person invests in a direct syndication, they invest directly in a piece of commercial real estate property. The professionals running the syndicated deal purchase the real estate and bring in investors to invest in that property. All of the professionals and investors own a part of the actual property. In our case, it would be a multifamily apartment complex. 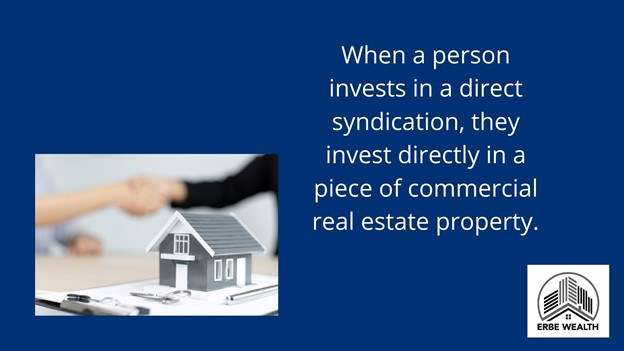 Another similarity between DIY real estate investing, and syndications are that the goals of investing are two-fold. Number 1 is income (i.e., cash flow) is generated from both of these investment types. Number 2, the investment will improve the investors’ net worth.

You see, when you purchase a piece of a syndication, you own a part of a multimillion-dollar apartment complex, and if you’re buying a piece of property, there is value there.

The final reason they are similar is that they provide great tax benefits.

Now let’s talk about some differences between DIY investing and syndicated real estate.

The first difference is the role of active versus passive income.

Now, I think a lot of people might think: Well, hey, I bought this rental, and it really is passive income because I have a rental company managing it, or if I manage it, I don’t really hear from the tenants very much so isn’t that “passive income”?

From being a landlord for sixteen years, I can tell you that managing real estate is a challenging and rigorous endeavor. I had many sleepless nights worrying about things that happened or could happen in the nice houses that I owned.

Thankfully, I never had anything tragic happen, but there were things that were entirely out of my control. For example, one of my tenants left her side of the duplex. She came back at one or two in the morning, and there was this little fitting around the toilet and it broke.

Since I’m not a plumber, I don’t know the term for it, but this broken fitting was not anyone’s fault. Since it broke when she was gone, the water just went everywhere and flooded her unit. It ended up being a whole ordeal for me. I had to get my insurance company involved and move my tenant out while the repairs were done. There were months and months of working with contractors and the city to get the unit back up and running. And that’s just one example of why managing real estate was really never passive for me.

For a brief period, I did hand my properties over to a property manager. However, I realized that I was still being contacted to make decisions about these properties because they were my properties and the decisions were mine to make. Yet they still charged me, for “managing” the property.

So, I quickly realized that that arrangement was not much better than what I was doing on my own. Eventually, I took back the “part-time job” of handling the property management myself.

The big difference in a syndication is that you genuinely are a passive investor. There are professionals that purchase and operate the property. You, as a passive investor, get monthly investment income from us.  The income is called a distribution and is paid to you monthly. 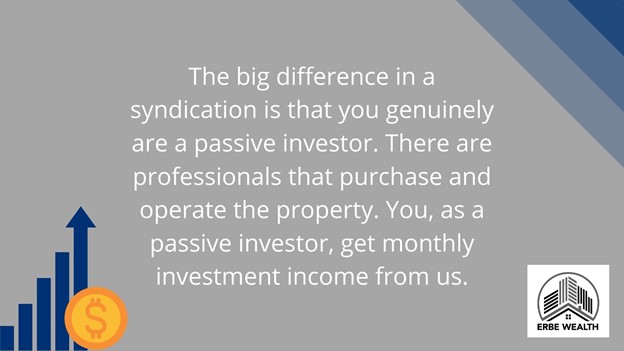 Best of all, you are never asked to get involved in the management in any way, shape, or form. You get a report once a month about what’s going on at the property, and you get a payment that comes to you once a month.

Personally, the monthly distributions were a breath of fresh air for me.  At the time, I was running a business as well as managing my properties, so once I started investing in syndications, that was off my plate.  In reality, I was actually doing better regarding cash flow and returns, which was amazing to me.

The second difference that people don’t think about is liability.

For example, when you purchase a rental property, you get a loan. Either that loan is in your name, or you created an LLC or some other entity to protect yourself. Basically, you set this rental property up to be protected if something awful happens there. As hard as we try to run our properties well, there is still an element that is out of our control.

In the past, when I had my own rental properties, that was something that kept me up at night. I sometimes worried that something could happen where the tenant would come back and sue me. I was not sure whether they would sue my entity or if they would sue me directly.

Now for syndications, that is definitely not a concern because the loan is taken out by the professionals that are purchasing and running this property.  All the liability of the syndicated investment falls on the professional team that runs it.

You are considered a passive investor and therefore have no liability. So, if something terrible happens at this apartment complex, it will never come back to you. 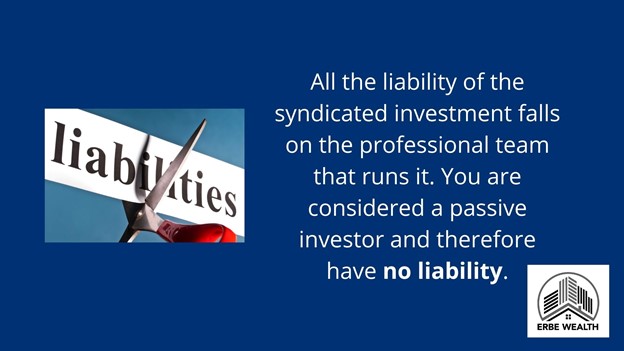 Once I started learning about syndication investments, I started examining how I was thinking about cash flow versus appreciation.

Before syndications, I had it in my mind that I wanted to build this little rental empire in Denver. My goal was to buy a house every few years; then, I would run the properties for 30 years and live off the rental income. That’s what my vision was until I got introduced to syndication.

As a landlord, I was never that concerned with cash flow; my focus was on future appreciation. On paper, I thought I had this great net worth, but my cash flow was only a few hundred dollars a month from my rentals.

Once I started working in syndications and talking with my wealthy investors, it was only then that I realized that cash flow in an investment is the very most important thing. That simple truth made me re-examine and change the way I had been thinking and structuring my investments.

As a result of that epiphany, I started to sell my single-family rentals one by one and put that appreciated value into syndicated investments where I would be getting a lot more cash flow and returns.

The model of investing in a syndication, having a professional team who knows the asset type, in our case an apartment complex, back and forth, in and out.  More importantly, this team is very experienced at operating this property as a business, which is for gain and profit.

These professionals should have a business plan of how long they perceive they will hold this property, what they will do to maximize the gains, and when they plan to get out.

Last and most important is that the professionals who run the syndications want to do everything they can to make their investors happy because you are actually the customer at the end of the day. They want to please you and make sure that you’re happy in all aspects of investing with them. 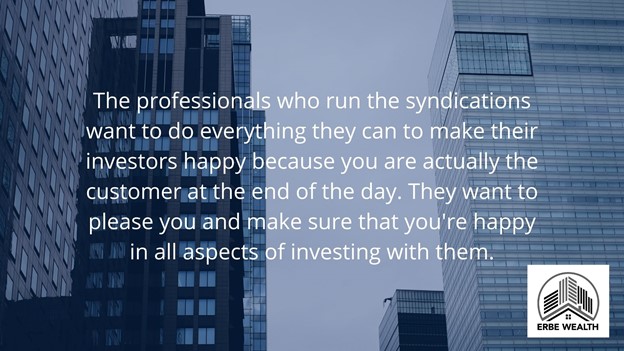 Personally, I’ve been on both sides—the do-it-yourself and the syndication—and I can’t express how awesome the peace of mind that has come from investing my money into syndications is.

The returns are something I never really thought of when I was running my own rental properties, but the returns for our properties are well over 20 percent annualized. I know that wasn’t anything I was even close to when I had my own homes. And then, on top of that, having that monthly cash flow ultimately was a game-changer as it allowed me to quit my day job and truly be a passive investor.

All real estate investments are not created equal. We all know that real estate should be an essential part of your portfolio as it is for the majority of wealthy people in America.

Here is a positive note to remember, whether you decide to go DIY on your investment journey or join the professionals running a syndication, as long as you are investing in real estate, you are taking a step in the right direction.

Times will not always be good, and mistakes will be made, but as long as you are learning and growing as an investor, success will follow behind.

Are you interested in learning more about investing in multifamily apartments? Give us a call or check out some of the other free resources available at: