One of the exciting prospects of a commercial real estate investment is that there are many options through which an individual can gain exposure to them. Two options are a real estate investment trust (REIT) and an individually syndicated deal. While both of these options are in pursuit of the same objective, there are differences in high returns, structure, and method.

In this article, I’ll go over the 7 key differences between REITs and real estate syndications. Hopefully, by the end, you will be able to determine which option is a more suitable investment. A REIT is a company that buys, sells, operates, or finances commercial real estate. Investors like publicly traded REITS for their liquidity opportunities, their ability to diversify their investments, and the steady dividend income. The downside is that the REIT share prices can be subject to periods of significant volatility and investors have no say in which properties their capital is used to purchase. 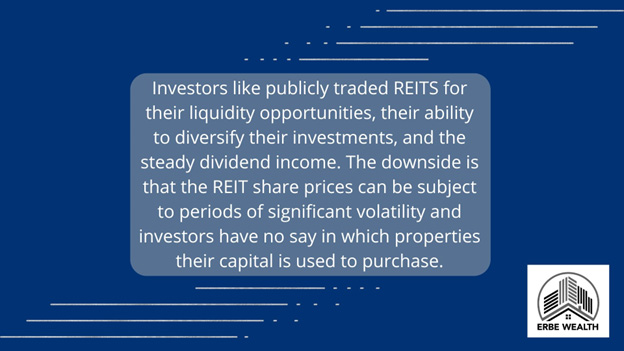 In contrast, an individually syndicated deal may be a suitable alternative for investors who prefer more control over the property selection process. A real estate syndication is the real estate term used to describe the joining of individuals who invest in a large transaction that would be difficult or impossible for any of one of them to do on their own. Commercial real estate assets are expensive, so it’s common for them to be purchased using a syndicate of investors in the syndicate.

There are two groups of participants. The general partners are the deal manager, and they’re responsible for finding the deal, getting the financing and most importantly, managing the asset once it’s purchased. The general partners also put together a group of limited partners, each of whom invests some amount of capital in the deal. The limited partners are passive investors, and they have no say in the day-to-day management of the property.

The goal of both the syndication and the REIT investment is the same. It is to earn a higher return, but there are some significant differences between the two that investors should be aware of before deciding how to deploy their capital.

The First Difference: Number of Properties

The first difference is the number of properties or assets. In a REIT, you’re typically investing in a company that holds a portfolio across multiple markets, and each REIT focuses on different asset classes. Let’s use apartment buildings as an example: that means that if you invest in an apartment REIT, you will likely be owning apartment buildings in multiple markets across the country. They can contain hundreds, even thousands of different properties in one REIT. 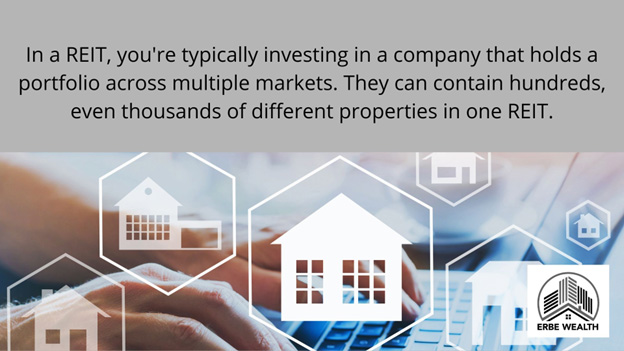 In syndications, you’re investing in a single property, in a single market. You will know exactly where the property is. The benefit of that is that the investor can perform their own due diligence on the specific property, the market, the tenants and the leases to ensure that they are comfortable with every aspect of the transaction.

The second difference is ownership. REIT investors own shares in a company that owns real estate. They do not own the underlying real estate directly. The situation is similar for syndication investors, but the one major difference is that in the syndicate all of the investors combined have direct ownership of a single property. The individual investors, the general partners, and the limited partners own shares of the syndication, which entitles them to a portion of the investment property’s positive cash flow.

The next difference is investment access. Publicly traded REITs are accessible to anyone with a brokerage account and enough capital to buy at least one share. So, it’s quite possible that if you have $100 to invest, you could invest in a REIT, probably within the day.

Now, the syndicated deals are only accessible to investors who qualify as accredited investors under the SEC regulations. This means that they must meet certain income or net worth requirements.

As I started to mention, the investment minimums for a publicly traded REIT is the next difference. The minimum is the amount of capital that it takes to purchase at least one share.

This could be one hundred dollars or less. Syndications often require a minimum investment amount that is much higher. The exact amount varies by deal, but it’s usually in the range of $50k to $100k that you would need to invest.

Another difference is liquidity. Obviously, publicly traded REITS can be bought and sold at will, which makes them extremely liquid. Depending on the broker and the demand, shares can be converted to cash within a matter of minutes.

The syndications are not only not as liquid, they are not liquid. It can take years to properly implement a business plan for a property. Because of that, many managers require commitments in the deals of at least three to five years, during which time the investors capital cannot be accessed. If there is an emergency or for some reason they have to sell their shares, they’ll usually be sold at a discount. 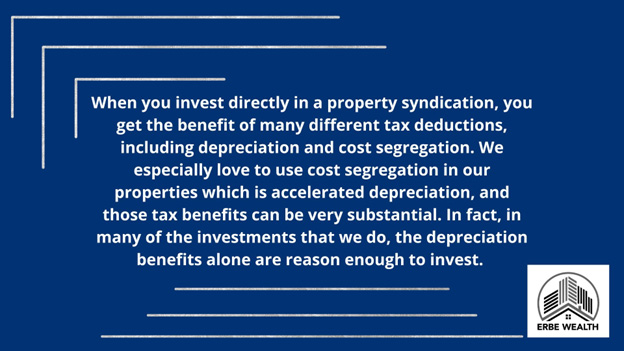 Basically, you would be showing a loss on paper even though you’re actually getting cash flow. You can use those paper losses to offset your other income when you invest in a syndication because you’re investing directly in real estate.

The tax benefits are not the same in a REIT. You do get the benefits of depreciation, but those are factored in before you get your dividends so you don’t get any tax breaks on top of that, and you can’t use the depreciation to offset any of your other income. The dividends are taxed as ordinary income which can contribute to a bigger tax bill at the end of the year.

The Seventh and Final Difference: Returns

The final difference is the returns. The total returns for both a REIT and syndication are very dependent on the property, the manager, and a multitude of other factors.  Both have the potential to deliver a high return or to deliver an average or not so good return. The one point to remember is that the returns for the REITs can be very volatile because they’re subject to STOCK MARKET factors that go beyond the performance of the underlying properties. Factors like unemployment, interest rates, and monetary policy can cause a dramatic shift in stock market and rate prices and can affect REITs.  In particular, total returns of exchange-traded equity REITs have usually averaged between 11.1% and 11.9% per year during the available 30-year historical periods.

In contrast, the returns for syndications tend to be less volatile for two reasons. First, their shares are not trading hands, so the price is not constantly changing. Second, the valuation of the underlying property may only be evaluated once or twice a year.

Our multifamily real estate syndications, when we factor in both cash flow and profits from the sale of the assets, have historically offered a 20% or more average annual return. If you were to invest in a syndication with a hold period of five years making a 20% average, you would essentially be making $20,000 per year for five years or $100,000. That means that you would double your money within the course of those five years. 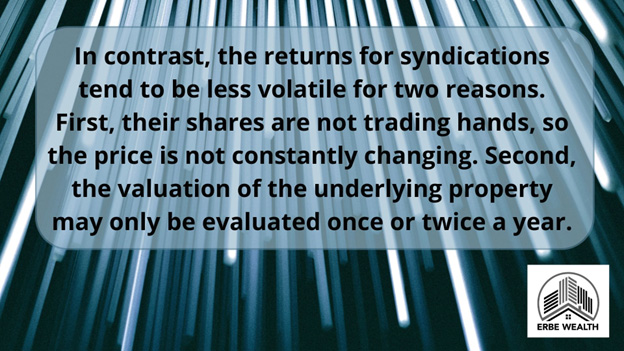 That’s great information but what about the risks? Despite the differences between the two commercial real estate options, the risks are actually fundamentally the same. They include the market risk that could change vacancy rate risk, that the space will go unoccupied, credit risk that tenants will default, and liquidity risk that the property cannot be sold at the end of the investment period.

Given the differences between the two options. It’s logical for people to ask what is the better investment.

That’s when you really should consider another factor that should drive the decision to invest in a REIT and it’s what’s known as the liquidity premium. The liquidity premium is the amount above the actual value of a non-liquid asset that the investor is willing to pay in return for converting that investment into a liquid asset. Putting it another way, commercial real estate is illiquid. It could take months to sell a building, but a share of REIT is a liquid asset that can be bought and sold instantly. That can be a great advantage of investing in real estate through a REIT. Depending on who you ask, the liquidity premium can be seen as a disadvantage and as just another cost. Why would you pay that premium if you do not need your money to be liquid?

So which asset type is better to invest in? In the end, it depends on your liquidity needs and your available contribution amount. Those should be the two biggest factors in deciding which of these is better for you to invest in.