Asset Allocation of the Wealthy Investor

What is Asset Allocation?

Asset allocation is the process in which you and your financial advisor talk about your risk tolerance, your age, and your retirement horizon. Then based on that conversation, they divide your investments among different assets. For the average American investor, that’s usually stocks, bonds, some cash, and real estate. Real estate could include owning the rental property or investing in a syndication. Usually, your financial planner comes up with this asset allocation, or maybe you just own a 401k. It should be something that you have discussed and hopefully discuss on an annual basis for how you want your asset allocation to adjust.

According to Investopedia, the average American’s asset allocation is 65% percent stocks, also known as equities. Then 16% percent is in fixed income like bonds, and 21% will be in cash—just for your short-term reserves or an emergency fund.

I started working with wealthy investors about five years ago when I became a real estate syndicator and wanted to raise capital for our projects. I would usually look over their financial statements, and as I started to look at a lot of statements pretty consistently, I was rather surprised by what I saw.

The wealthy investor’s money was consistently invested in businesses, in real estate—directly owned or managed. A lot of it was put into syndicated real estate opportunities. They had some stock investments, but those were typically a very small percentage of their overall allocation—maybe 10-15%. I guess what was more surprising to me was what wasn’t there. Very, very few of these investors actually had a 401k, which I found interesting.

Once I started talking to some of the investors and learning a little more about their habits and what they like to be invested in, I found that they want to invest in cash-flowing assets.

The wealthy look at money differently than the rest of us. 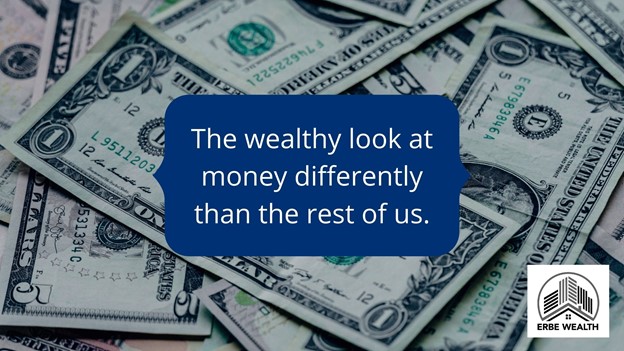 As time went by, I realized that there are two different ways that money is viewed in this country. Quite frankly, the main way I thought about money up until then was accumulation.

I call it “Nest-Egg” Investing.

For example, say you work for a company. You have your money put into a 401k. You’re not entirely sure what it is invested in, but you go ahead and contribute on a weekly, monthly, or quarterly basis. The hope is it will just keep growing: you just set it and forget it. Then in 30 years, you hope that there will be enough money to retire.

The accumulation view of money is to put your assets in this one place and let them grow until it’s ready and it’s time for you to start taking those assets out. In this scenario, you essentially give up control of your assets as they grow, unaware of what you are invested in, the fees you pay, and most importantly, of the future tax rates you will be paying once you are ready to retire.

This accumulation view on money also applies to investing in rental properties. I would have definitely been in that boat. Back in 2005, I purchased many single-family homes and just managed the properties myself.

I would get very little cash flow out of them, but my goal was to purchase them, hold them, and manage them for 30 years until they were paid off. Then I would have the cash flow that would come in.

There was no thought about how much money I was sitting on in each of those homes and how that money, the appreciation, what kind of returns I was getting on that money that was just sitting there.

How DO the Wealthy Think Differently about Money?

The best term I have for their view of money is utilization. That simply means they are using their money at all times. They view money as a tool.  Every investment they make, they are looking at what that investment is doing for them now as far as cash flow appreciation and what kind of tax benefits they’re getting. A very savvy, wealthy person actually may use their money in two places simultaneously in some investments. 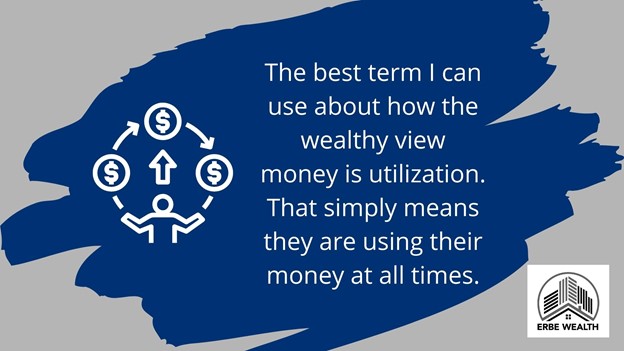 In a nutshell, there is a mindset difference of how money is viewed.

The first mindset which is the concept of having your money work for you right NOW which produces cash flow, money right here and now.  I call this concept UTILIZATION.

This concept is diametrically opposed to the other way MOST people look at money.  I will call this ACCUMULATION.  This is when people put money somewhere to sit and grow.  A very hands-off approach.  That money can be sitting in a 401K, a rental property you’ve owned for YEARS, a bank or under your mattress.

The main point is these are people who view their money as their “nest egg”, hoping it’ll grow in the 20–30-year period to the point of when they retire there is enough there to fund their retirement.  And all the while it is growing with the understanding that they have no control of their money.  They have little knowledge of:

This is the direct opposite of the utilization method, where the investor is actively involved with their money at all times and is deploying the capital in cash-flowing investments. They constantly work to address and mitigate tax issues as they come up. In other words, they are actively involved.

I know there are a lot of myths about the wealthy investor.  Most of them I’ve dispelled by working with these investors and seeing firsthand how they invest. However, I think the most common myth that I hear is that rich people got rich because they invested in crazy high-risk deals.

I can tell you that what was surprising to me is that nothing is further from the truth. The rich are very concerned with how their investments are performing. They primarily want to be invested in very conservative investment vehicles, and they’re very interested in tangible assets like real estate.

An article about TIGER 21 confirmed my observations about the wealthy. TIGER 21 is a networking group for very high-net-worth individuals. People have to show that they have a net worth of $10 million to even join one of their groups.

What’s unique about them is that they talk to each other and their groups about their portfolios. They do a portfolio defense at each meeting, so each member gets up and talks about what they’re invested in and why. Because they do that nationwide, they have all this data every year. They put out an asset allocation report annually, and it’s available to the general public. (Check it out HERE)

What I found pretty fascinating is that their asset allocation follows very closely with what I have seen from my own wealthy investors. In a nutshell, these investors consistently have 30 percent of their portfolios invested in real estate. And again, that’s not the do-it-yourself real estate rental property. They are -vetted syndication deals, in which they’re getting cash flow from the get-go. 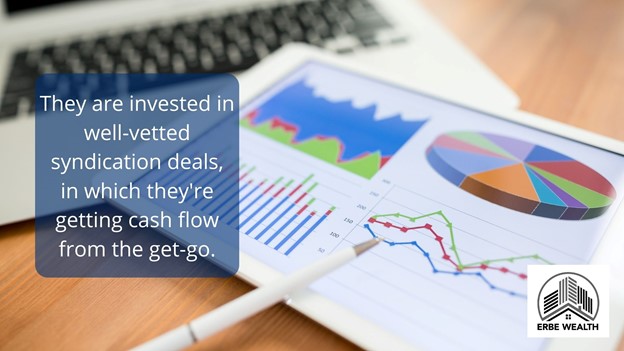 Maybe you are thinking: I’m one of these people you have been talking about that has a 401k, and I’ve been contributing for years. I want to have some real estate diversity in my portfolio. How is that even possible now that I’m seemingly stuck in these golden handcuffs?

I want to assure you because I’ve worked with many people that are just in your position. Many things can be done in this day and age to make real estate accessible for you to invest in.

Another option that some people consider is just taking some money out of their 401k, paying the penalty a 10% or whatever it ends up being, and investing that money in a real estate syndication.

Some people don’t want to pay the fees to the IRS, but you might want to consider two things. Number 1: you get significant tax savings by investing in a syndication the first year that very well could offset that penalty. Number 2: evaluate whether this money might be of better service to you when invested in a syndication.

For example, all of our past and current syndications have averaged over 20% annualized rates of returns every year. If you look at what the S&P or even what your 401K has done since you have owned it, you would see that it has not performed that well.

Your mindset about money is critical. Start taking a more active role in your investments, and if you don’t have any real estate in your portfolio, make some changes to align your portfolio with what the wealthy do. Be more involved with your money and how it is invested. Don’t depend on others to do that for you.